Skip to Main Content
It looks like you're using Internet Explorer 11 or older. This website works best with modern browsers such as the latest versions of Chrome, Firefox, Safari, and Edge. If you continue with this browser, you may see unexpected results.
Academic CalendarCollege CatalogCourse Schedule College Store myPHSC

There are many excellent film sources for heavy metal research, including Documentaries and Music Videos. For popular films with heavy metal themes, see For Fun. All links and information default to the Internet Movie Database (IMDB).

Many films are available for free at a public library or can be ordered via interlibrary loan (ILL). Pasco County Libraries, Hernando County Libraries, New Port Richey Library, and Hillsborough County Public Library Cooperative all have DVDs available, as well as robust streaming collections via platforms like Hoopla and Kanopy. Check with your local branch for more details on how to access this material.

"An examination of the heavy metal music subculture that tries to explain why, despite the longevity and popularity of the genre, fans are marginalized and ridiculed for their passion." - from IMDB

"A continued examination of the heavy metal subculture focusing on the adaptation and performance of heavy metal in various global communities, and how the increased import of Western cultural forms has impacted new global markets." - from IMDB 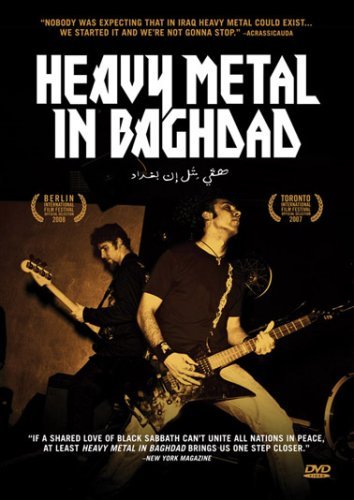 "In the late summer of 2006, in the middle of the insurgency, filmmakers Eddy Moretti and Suroosh Alvi traveled to Baghdad to meet and interview the only heavy metal band in Iraq, Acrassicauda. "Heavy Metal in Baghdad" is the story of the band and its members, young Iraqis whose lives have been distorted and displaced by years of continual warfare in their homeland. The filmmakers have collected glimpses into the struggles of Acrassicauda as they try to stay together and stay alive. Their struggle is the untold story of the hopes and dreams of an entire generation of young Iraqis." - from IMDB

"Since 1978, Anvil has become one of heavy metal's most influential yet commercially unsuccessful acts. In 2006, after a fledging European tour Anvil sets out to record their thirteenth album and continue to follow their dreams." - from IMDB

"Musical artists, their careers, their highs, their lows and everything in between are profiled and interviewed." - from IMDB

Metal music videos are generally available on YouTube, Vimeo, or DailyMotion. But a good place to search is the Internet Music Video Database, which is a massive catalog of information about music videos. Two classics from Twisted Sister and Metallica are included below.

"Spinal Tap, one of England's loudest bands, is chronicled by film director Marty DiBergi on what proves to be a fateful tour." - from IMDB

"After being kicked out of his rock band, Dewey Finn becomes a substitute teacher of an uptight elementary private school, only to try and turn his class into a rock band." - from IMDB

"The epic and over-the-top adventures of Dethklok, the world's most successful death metal band." - from IMDB